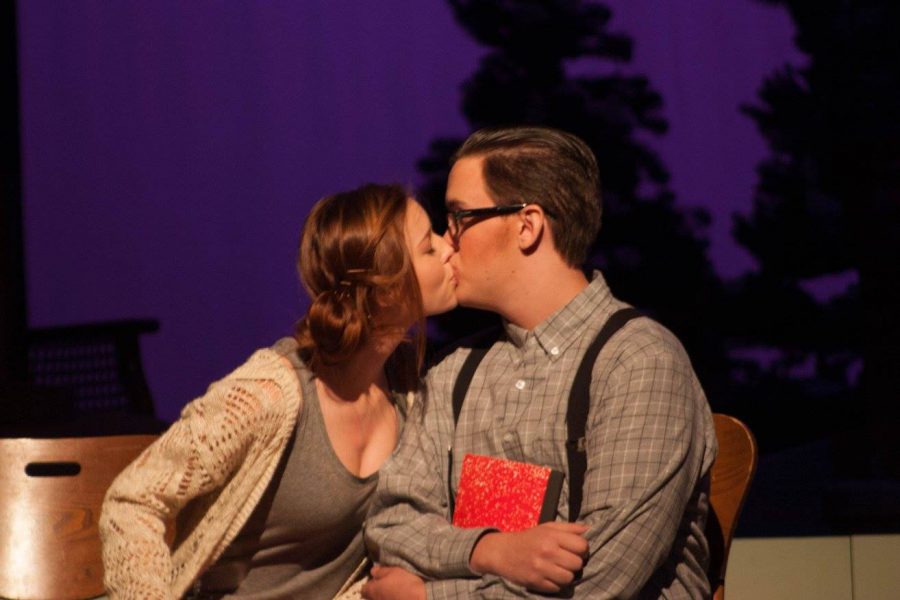 From the moment the first few notes of the opening score are played, the viewer of Arvada West’s fall play “Almost, Maine” is transported to a small “almost-town” in the middle of Northern Maine where love is possible, the metaphors are heavy, and the laughter is plentiful.
The metaphors are plentiful and touching, but at times overwhelming.
The play takes place on a cold Friday night in February in Almost, Maine. On this night, the characters begin to fall in and out of love. Several different skits are acted out as the characters’ love stories all intertwine.

The play has one set; only chairs and benches are moved around as the play progresses. This simple set allows the viewer to focus on the palpable chemistry between the characters. One particularly poignant example of this is scene 6, “Where It Went” in which a husband and wife realize that they don’t love each other any more, on their anniversary nonetheless. Their words to each other are harsh, but it only makes it more real.  The costumes, too, are simplistic, but this only adds to the small town charm of the play.

With eight separate acts, the characters’ monologues are lengthy but still engaging. The metaphors are plentiful and touching, but at times overwhelming. A character carries her broken heart in a bag; a couple gives each other the love they gave each other in red plastic bags; and two female best friends literally fall over as they fall in love with each other.

“They Fell” is the least graphic scene of the play (there is no kissing and no sexual innuendo) but perhaps the most controversial. In 2014, a North Carolina high school unexpectedly canceled their school’s production of the play due to “sexually-explicit overtones.” Many students that were in the play, however, believed that it was canceled due to this scene, which involves two gay characters. The chemistry between the characters is immediately different than all the other scenes. These are two female characters who can’t seem to figure out why they’ve yet to have a successful date with a man and it’s obvious that the reason is that they’re both in love with each other. The scene climaxes as one character declares her love for the other and the other accuses her of crossing a line, their emotions so high strung that the viewers can feel their own heart rates increasing in sync with the characters’.

The Arvada West administration certainly deserves applause for being so progressive in not censoring the theatre department.  While other high schools have not allowed productions with gay characters, the last two fall plays have included gay characters.
“Almost, Maine” is everything a play is supposed to be: heartfelt, emotional, and an escape from the real world. Though this may not be the most poignant or the most ambitious of plays, it is certainly a successful, enjoyable play–standing ovation worthy.