Review: “Captain Marvel” is worth seeing 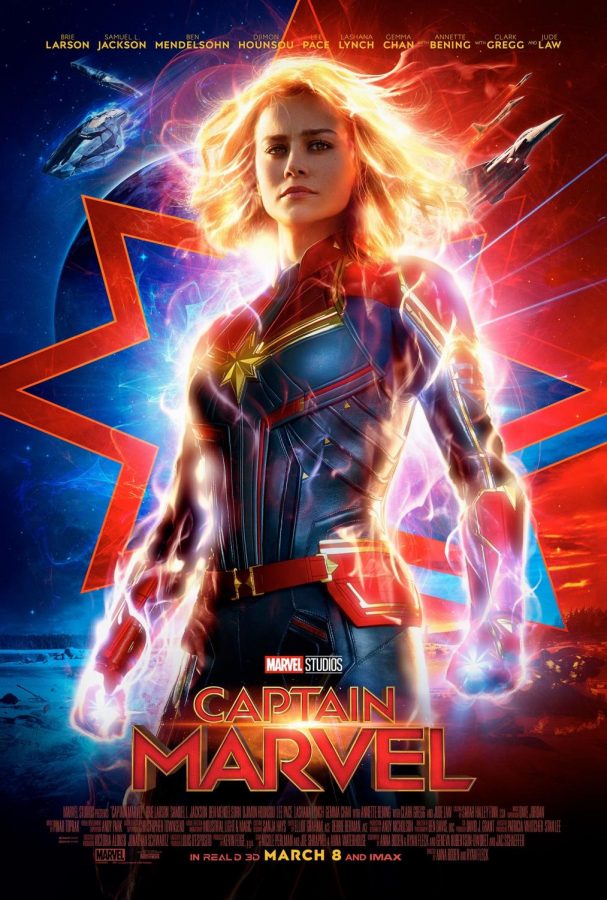 Captain Marvel, the latest installment in the Marvel Cinematic Universe (MCU), is an excellent movie. Starring Brie Larson as Captain Marvel (Carol Danvers), a Kree warrior who ends up on Earth (referred to as planet C-53) on a mission to stop the evil Skrull, the movie has it all: a strong female lead, 90s pop culture references, and a refreshingly fun plot.

If all of this sounds like nonsense, you may not have seen a Marvel movie yet. While a background in the MCU isn’t necessary to understand this movie, it certainly helps. If you have seen any of the Avengers movies, you’ll recognize some familiar faces, like Nick Fury (Samuel L. Jackson), Agent Phil Coulson (Clark Gregg), and the Kree leader Ronan (Lee Pace). Without revealing too much, the movie will set up everything for the Avengers, and yes, it will tie into “Infinity War.”

Marvel has effectively ensnared its audience with the end of “Avengers: Infinity War” which had the majority of the franchise dying off. With every new installment, fans must watch the movie to find out the fate of their beloved characters. However, this is a movie which is worth watching.

Brie Larson shines as a hero, and she is a welcome addition to the universe. She has the same witty sarcasm as Tony Stark and the same American hero backstory as Steve Rogers, but Larson’s attitude, strong female friendship with Maria Lambeau (Lashana Lynch), guarded tenderness, and ability to overcome all odds make her a new kind of classic superhero. Making Larson’s performance even more impressive, she did all of her own stunts. It is clear that Danvers will become an essential part of the team that defeats Thanos–she’s already appeared in trailers for “Endgame”– but the most exciting part is that she’ll be a new female superhero for young girls to look up to.

The movie brushes over some deeper issues that it could have gone into, such as racism and sexism. It’s obvious that Larson’s character experiences sexism–there’s an entire montage of men telling her she’s not enough–but she doesn’t really go into how this affects her. Larson’s sidekick, Lambeau, has a few moments of her own but isn’t a central part of the storyline. Their friendship is strong–and it’s refreshing to see a solid, platonic, female relationship–but Lambeau has a weak backstory. It’s unclear how she ended up in Louisiana as a single mother, but her backstory isn’t essential to understanding the plot.

The plot has its share of stereotypical Marvel scenes: witty one-liners and classic superhero action, but the villains aren’t who you expect them to be, which makes a powerful point about stereotypes and expectations. The plot is twisty–some twists are to be expected–but it doesn’t follow the typical Marvel movie format.

As pop culture demands that superhero movies make a push to become more diverse, they’ll need to stand out. After the success of “Wonder Woman” and “Black Panther,” diverse superhero movies are going to need to be equally successful, if not more, to show producers that it’s worth it to continue to make diverse movies.

“Captain Marvel” certainly proves that it’s worth it, but it needs to be an excellent movie in its own right, not just because it stars a female superhero.