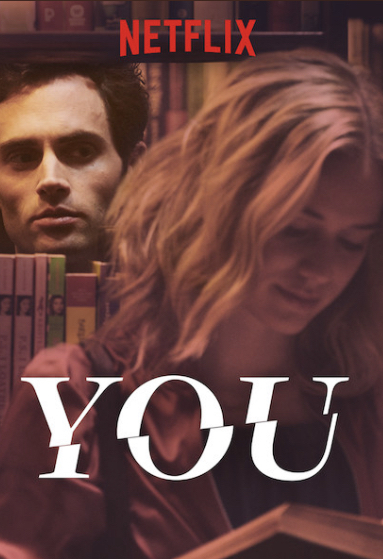 Netflix recently released yet another addicting series to its wide collection, “You.” Created by Greg Berlanti and Sera Gamble, this binge-worthy show stars many famous actors from various other shows, including Shay Mitchell from “Pretty Little Liars” and Penn Badgley from “Gossip Girl.”

This show is about a regular guy who meets a girl. He quickly becomes obsessed with her and will do anything to get to know her better. Through the show he gets more and more obsessed with the girl.

They then split up and he mostly gets over his obsession, until they meet again. He then checks up on her by stalking her on social media and then looking for her. He quickly gets her back and they start dating again until she finds out that he has been stalking her for awhile. This leads to him kidnapping her and eventually murdering her. The producers lead you to believe this will be the end of this show, until they introduce his next victim, earlier in the show revealed as his ex-girlfriend, leaving it wide open for season two.

Throughout the show you can see how his obsession forms and it adds so much suspense to the show. The show is really addicting and that’s why I liked it so much. They build up the suspense in every episode and all of these all lead to the climax of each episode.

What really contributes to this show is that every little action that happens through this show eventually leads to the end of the season which is the most suspenseful part of the whole show. They left every episode on a cliffhanger, leaving you wondering what happens next.

The show also contains a really interesting plot. When you are watching the show it is never just a background show. The plot never gets dull or boring; it always keeps you on the edge of your seat and is chilling or sad. The show has many moments that leave you shocked with your mouth wide open. These are the best parts of the show and not many other shows can do this.

The show however can become a little bit much. For example, when he becomes a stalker and obsessed with her, some people may find it creepy and not like the show. It also has some graphic scenes where people get hit, shot, or killed, which could also make some watchers uncomfortable.

I really liked this show because of all of the elements included. This show was everything you need in a show: it has romance, horror, and sad scenes.