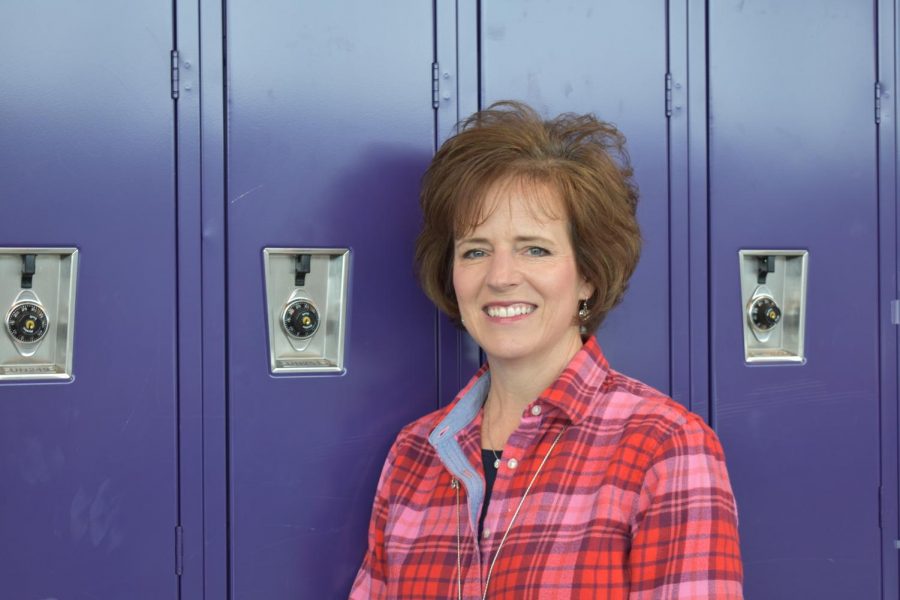 Karen Kramer, an English teacher at Arvada West, is a hard-working teacher, thoughtful mom, and loving wife. She is also the last person one would expect to have a black belt in Taekwondo.

Kramer’s interest for Taekwondo sparked when she placed a bid at a school auction for her son’s to participate in Taekwondo training. Her and her husband ended up winning with the highest bid, putting her two sons into Taekwondo. She then thought it would fun for her to participate with her sons, using it as an opportunity to bond and spend time with them. Her youngest son did not want anything to do with it and ended up quitting; her oldest did Taekwondo with her for a couple months before he lost interest.

When her sons were no longer participating, and her interest and curiosity for the sport still burning, she continued.

After a while, Kramer set the goal for herself to earn her black belt; the level of competitiveness and the desire to meet her goal is what drove her to stick with Taekwondo for three and a half years.

“I set the goal: ‘earn the black belt’, and that’s how I got into it. It was more just to go check it out to see if I liked it and I did. It wasn’t like ‘Gee this is on my bucket list to do’ to be a black belt. I did it with my kids because I thought it would be something nice to do together instead of me sitting there at their basketball games.”

Through the high and lows, her sheer passion and competitiveness kept her going. Kramer had to go to Taekwondo three days a week, balance her job as a teacher, as well as being a present mother and wife.

“The classes were often in the evening so I had to coordinate the days that I was at Taekwondo, I had to get grandma or my husband or somebody to get my kids to where they needed to be,” says Kramer.

She genuinely missed her family and felt left out in the summer when her husband and kids would get ice cream or ride bikes and she would be at Taekwondo.

“It was a time issue, and I really missed being at home with my family.”

In the process of earning a black belt, Kramer had to learn a sequence of forms. One has to know how to defend themselves, and to spar. In order to get ready for black belt testing, Kramer prepared herself physically by doing push-ups and doing a lot of running. She would also visualize the forms, which are like routines, and take 20 minutes of free time to go through the forms, despite the fact that she was at practice three times a week. Her friends at Taekwondo were also a big help, as they would meet at each other’s houses for about and hour and work on what they needed to work on.

One of Kramer’s favorite skills to practice was knife defense. Someone would come at her with a plastic knife and not only was it a matter of using the defense moves she learned, but getting the knife out of the hands of the attacker.

Her most challenging moment in Taekwondo was sparring. She did not want to hurt anyone, even though they had gear when they sparred.

“It’s one thing to practice punching, and I can come right to your nose and know where to stop and not actually hit you. But, when you spar, you’re throwing punches and kicks,” Kramer explains.

Another challenge within sparing was that she would often be matched against younger girls who were faster and more flexible than her. Kramer was skeptical that she herself could perform certain kicks and jumps that the younger girls could do.

“Getting in the ring, it’s either sink or swim, you have to figure it out.”

Although she did not continue her training after receiving the black belt, she never wanted to quit before she met her goal. With all of the time, effort and money invested into meeting her goal she knew that giving up was not an option.

“There were times I thought ‘this is getting tiring’ but at that point I had gotten so far, I had already put in so much time that I knew I could meet the goal,” says Kramer.

“I really wanted to demonstrate the idea for my kids that you have to sacrifice things to meet your goals,” says Kramer.

Kramer took many things out of the experience, both mentally and physically, but what stuck out to her most was meeting the goal that, for a while, she was not sure she could meet.

“Each time I earned a belt, it was humbling in its own way,” says Kramer.

In the world of Taekwondo, it is either sink or swim, and Kramer likes to let her accomplishments speak for themselves.