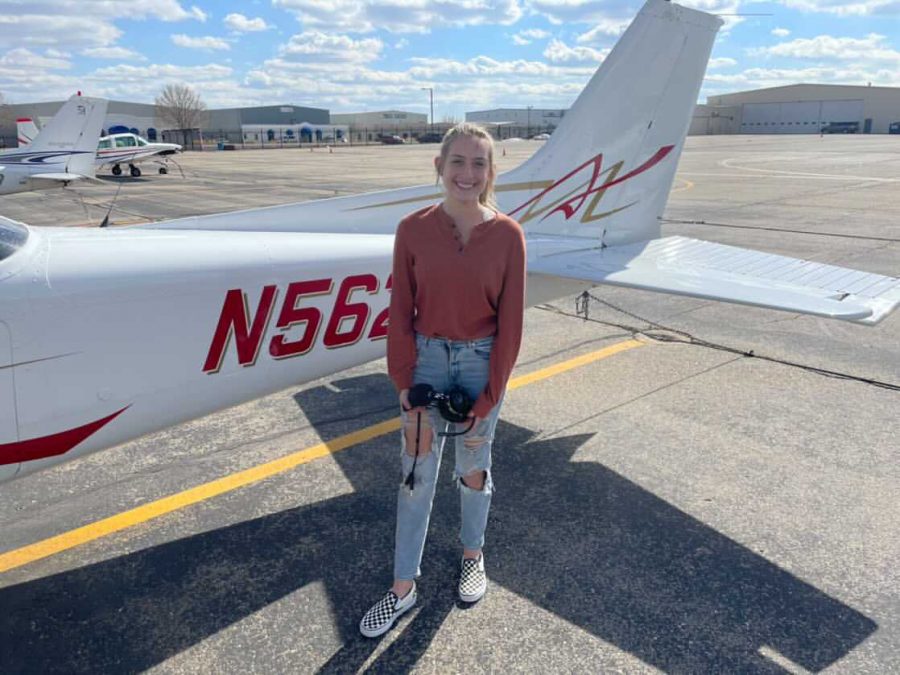 Senior Madison Taylor begins her journey to becoming a pilot, with hopes of receiving her private license by June.

While most A-West students are working to get a driver’s license, senior Madison Taylor is on her way to becoming a pilot. What started as a childhood dream recently became reality when she began researching flight schools in December of 2020. Now, Taylor is on track to get her pilot’s license by June 2021.

Taylor remembers the first time she ever considered becoming a pilot, “My Mom dated this guy about seven years ago. He was a pilot and would talk about it nonstop.”

From his stories of flying to his collection of model airplanes, she decided that when she got her driver’s license, she would work to get her pilot’s license as soon as possible. However, being a child, she forgot about that dream entirely until recently.

During the 2020-2021 school year, Taylor recognized how much free time she had. The pandemic had freed up her schedule much more than it otherwise would have. With shorter school days and having only four classes, Taylor decided it was time to take a look into flight school.

Taylor mentions, “I did a discovery flight and decided that I was actually in love with this!”

Now that she has started flight school, Taylor goes flying five to seven times a week with an instructor.

According to ATP flight school, to receive a private license, Taylor will need to complete 40 hours of flight time training and pass multiple exams to test her knowledge. While the courses are challenging, Taylor proves to be motivated enough to do all that she needs to to get her pilot’s license.

In the future, Taylor has goals to become a flight instructor, a private pilot for jets, and eventually land a job at NASA. As she goes to college, she plans to get certified to fly more passengers and to be able to fly in difficult situations.

The most challenging part of getting a pilot’s license Taylor says is, “Time, money and the mental aspect of it. [Flying] is kind of like getting into a car for the first time, especially when there is no one in the car next to you. You are solely responsible for keeping yourself safe. In the air it is the exact same thing, but it’s three dimensions- and you can fall really far. So there is this mental aspect where you need to be on your game the entire time.”

Taylor also mentions that becoming a pilot takes a lot of studying because, as a pilot, one must be prepared for every possible scenario in order to stay safe.

Despite these challenges, Taylor encourages “If you have the time and you have the ability and you have the mental drive and motivation to do it, then I would one hundred percent recommend [getting your pilot’s license]. There is absolutely nothing like it!”

Flying clearly puts the world in a new perspective for Taylor. Not only does her example inspire others, but it shows students just how possible it is to accomplish their dreams. If a student wants to do something, then they should just do it!