Running is life for David Rhoades 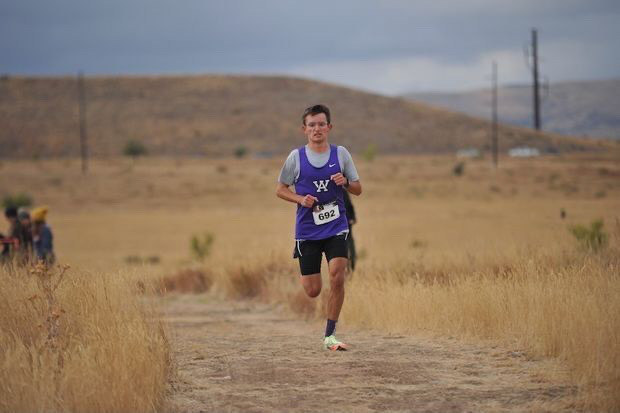 David Rhoades, a senior at Arvada West has been running cross country for four years. Running has meant more to Rhoades than anything, it is his life. He thrives in the grind, grit, and endurance needed to survive every day as a member of the A-West Varsity cross country team. Without a doubt Rhoades will be remembered for all of the hard work he has put into the program.

Rhoades elementary school teacher Mrs. Gregston, was the first one to introduce him to running. He says, “One day in gym, she talked to us about an after school running club and for some reason I signed up, roughly a decade later here I am.”

His passion started when he realized how good he really was at running. Rhoades understood in middle school that he had something that others didn’t. This convinced him to keep running and to try to make something out of it. Back in his middle school days Rhaodes ran to stay in shape and keep his unique talent alive.

Now Rhoades runs varsity for A-West. And with that, comes a bigger responsibility. Rhoades says he puts in, “8 or so hours a week for running, longer runs with strides and a cool down can take like an hour and half and the easy days are usually around 45 minutes to an hour.”

Rhoades has clearly been heavily invested in cross country running. His favorite running memory was the Nike Cross Regional (NXR) trip from his sophomore year. NXR is a big regional race in Arizona.

Rhoades remembers, “When we were at the airport waiting to fly back here we gathered a mob of other NXR runners and marched around the airport being loud and obnoxious. It was pretty awesome.”

The biggest accomplishment of Rhoades’ career however, is winning the League Championship. This is one of the most important races of the year in cross country and it meant a lot to Rhoades.

He says, “I’ve never won a race before let alone the League race and I am very proud of it,  I won by like 20 seconds as well which is awesome.”

After winning this race it was obvious that all of Rhoades hard work had paid off. Despite not winning a race in 3 years, he finally broke through his senior year. As well as winning League Rhoades was the only only runner on his team to qualify for state! All of A-West should be proud.

Rhoades likes to keep things in perspective and he is always looking for ways to motivate himself. He says, “I think what makes a good runner is the dedication and grit you bring to running. I don’t believe you need to be some national level runner to be considered a good runner. As long as you keep at it and never give up with the task you are given or the goal you hold close to you then you are just as good as those national level runners.”

Sometimes the most important part of running can be the mental side and how you are able to use your grit and push through. Everyone feels a different way while running.

For most people there tends to be a life outside of school and sports. And in Rhoades case, this holds true.

Rhoades states, “Outside of school I like to spend lots of time with my girlfriend. I like hanging out with my graduated running friends as well as playing Minecraft on my phone. Oh, and for being as great of a runner that I am I sure eat like crap.”

Not only is he an accomplished runner, he reaps the rewards of running. The Mayo Clinic suggests that running benefits many things including your cardiovascular system, and it cuts the risk of some cancers.

Overall, Rhoades running career has been a success. Winning the league championship was just the icing on the cake for this cross country season. Proving that Rhoades name should be circling around in many scholarship conversations from the top schools.