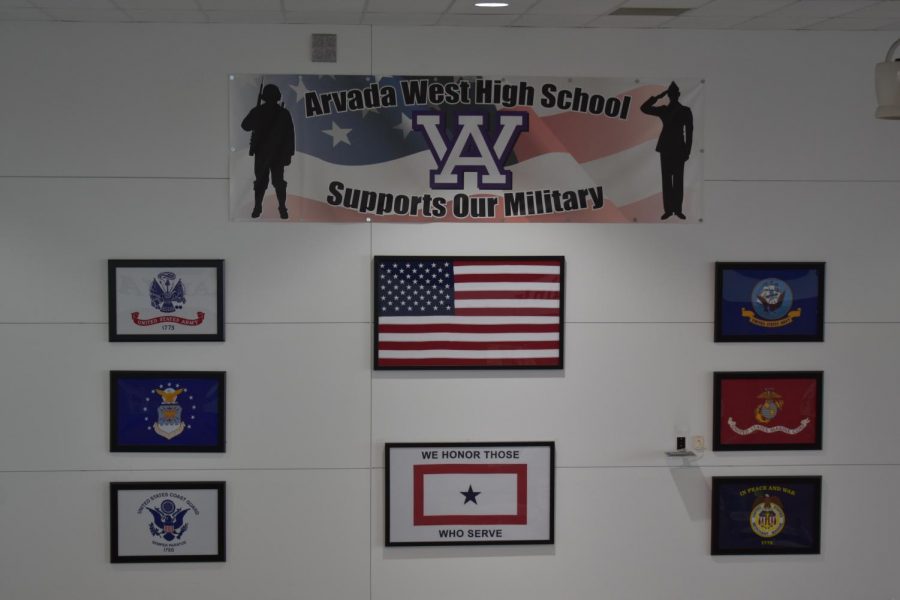 A display in the commons at Arvada West.

Military recruiters visited Arvada West High School 18 times over the course of the 2018 calendar year. The Army visited five times, the Navy visited seven times, the Marines visited twice, the National Guard once, and the Air Force three times. Documents from the school’s online calendar show the dates and times of the visits.

Jefferson County School District has a policy to limit post-secondary recruitment events–including military recruitment–to twice per year, with principal discretion. The policy can be found online and was adopted in February 2007, with the most recent revisions in August 2012.

The policy states, “General meetings or recruiting events will be limited to two per school year with principal approval and will take place in a location specified by the principal.”

The policy also states, “Such access must be limited in order to maintain balance against the potential disruption to the greater educational mission of the school.”

“Most of our policies have a line that talks about flexibility for principals,” said Jefferson County Schools Community Superintendent Kristopher Schuh.

Arvada West High School has its own military recruitment policy, drafted by former principal Dr. Robert Bishop and counselor Michael Sena. This A-West policy states that recruiters are permitted to three “visits” per semester–such as a table set up at lunch–as well as one “event” per semester. The policy was shared by Sena, but is not found on the school’s website.

“A lot of it was what Dr. Bishop–what he wanted in the building,” says Sena. “One, we wanted to make it equitable to all branches. Each branch can have a table set up during lunch once a month and one event a semester. We really try to avoid being in the classrooms.”

Schuh adds that Bishop’s history as a Marine Corps veteran may have something to do with an increased military presence at Arvada West.

Typically recruiters will come to Sena to set up a visit at the school. Sena says there is a lot of turnover in who the recruiter is, so recruiters will reach out to him at the beginning of the year to set up a time to come in for a lunch table visit, such as the first Monday of every month.

What constitutes a recruitment visit?

“I really think about recruitment as when a student or a family has approached the military and said ‘we really want to have more conversations with you and learn more about what you can offer for our child,’” said Schuh. Schuh explains that students who do not have time outside of school to talk to recruiters can set up one-on-one appointments with students during school hours.

“A recruitment visit I think would be an appointment made with an individual student,” says Sena.

Most other sources were consistent with this definition, with a few notable discrepancies. Petty Officer Matthew Oliver described setting up tables at lunch as “Navy awareness.”

“It’s more just Navy awareness, not specifically geared towards recruiting. It’s mostly just to get out the awareness for sophomores, freshmen, juniors so that when they become seniors and we talk to them, they’re more familiar with the Navy and Navy recruiters,” said Oliver.

Oliver has been the recruiter for Arvada West just for this year and also works at Arvada High School, Westminster High School, and Faith Christian High School.

Arvada West High School Principal Geree Santarelli offered a different definition, saying, “We have general military recruitment visits, like the Army will be here, and they’ll be up in the commons, or the Navy, or whoever. But then we also have times when a kid shows interest. And they set up those individual visits with the kids.”

US Army Staff Sergeant Isaac Brown described a table set up at lunch as “recruiting activities,” adding that he talked with about 25 students and made 4 appointments as a result of that visit for September 10, 2018.

Four days later, the Army visited the school again as part of the homecoming assembly, and had a table set up afterwards, where they made 7 appointments and talked to about 50 students, said Brown. Brown stated that last year, the Army visited approximately 8-10 times for table set ups and “one Total Army Involvement in Recruiting (TAIR) event with a semi-truck full of army robots, simulated shooting ranges, and some games. This event brought in about 12 good leads, and 1 enlistment.”

How does Jeffco compare to other school districts?

Denver Public Schools board liaison Ramona Lewis says, “We do not have a board policy around visits for either military or non-military post-secondary options, however, we aim that military recruiters have equal access as any postsecondary option.”

Lewis added that while there is no hard-and-fast definition of a military recruitment visit, it “can look differently by school, but it could look like setting up a table at lunch, an optional session for students to self-select to attend, or classroom visits- more common for our ROTC programs.”

“We’re very proud of our kids that commit to the military, whether it be through an academy appointment or through enlisting. We just have to keep options open for kids,” says Santarelli.