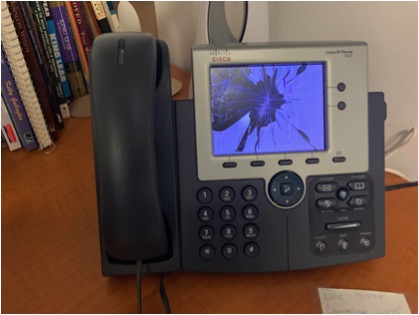 Teachers Karen Kramer, Jeff Cook, Peggy Asmus and Casey Hawk all walked into their classrooms on October 1 discovering that certain items had been vandalized. An unknown person ventured into the upper North Wing that morning and disturbed these teacher’s items.

Kramer mentioned that she did not have much time to talk to many teachers, but the ones whom she had talked to had experienced certain items being moved and disrupted on their desks. Cook allegedly had a “vape pen” plugged in on the side of his computer, as well.

Kramer describes what her particular classroom looked like that morning: “When I came in this morning, my phone screen had been smashed with most likely the receiver because the receiver was off the hook. My lamp was knocked over, my microphone system had been knocked over and the mics were on the keyboard.”

She also had sticky notes with information for her classes that were crumpled up and thrown on the floor. Although Kramer’s room seemed to be where the biggest disturbance occurred, Kramer said she knew that Asmus had candy wrappers on the surface of her desk along with various items that had been removed from her desk drawers and placed on top of her desk. Hawk had tables that had been moved and arranged out of order.

Hawk stated, “Things were knocked off my bookshelves and my computer was all messed up. Cords were all knotted together and drawers were open, but there wasn’t anything missing.”

A twenty-year A-West employee, Hawk mentioned that the whole situation was confusing for him. He said he figured that his first thought was that a coworker was just messing with him so he just laughed off the situation. After he learned that the individual who left his room disorganized was not a friend, he figured that this person must have been  “very angry, messed up or on something”.

Additionally, Hawk’s tables and chairs had mean rearranged: “I have a system, you know, and they were just all moved. Chairs were on the floor and it was like someone had a rampage.”

Security guard Rich Loper refused an interview but did mention that he knew who the individual was that decided to mess up these teachers’ classrooms and that person has been identified.

Principal Geree Santarelli comments that she could not discuss the issue other than to say that it has been handled.