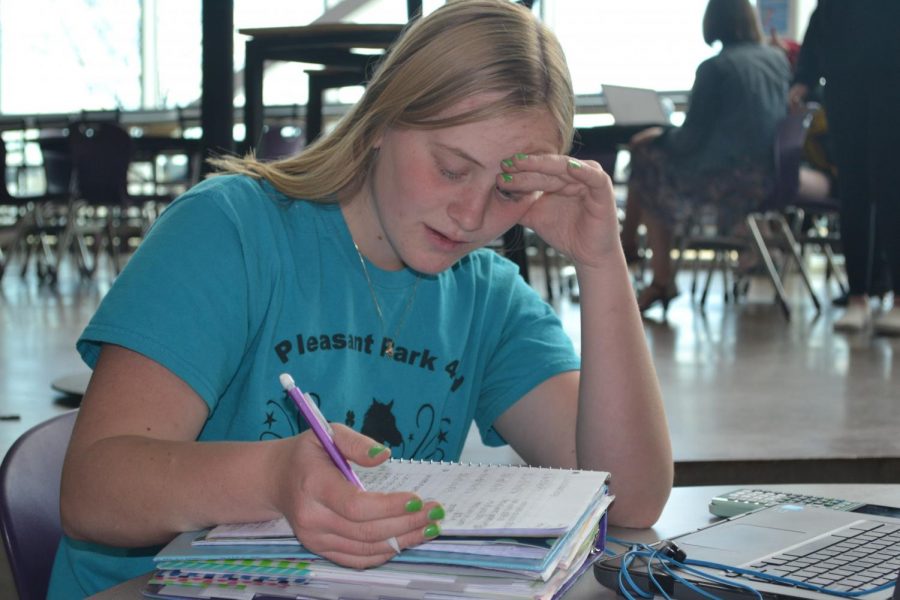 Freshman Avery Ward comments on the purpose of GPA in school.

Imagine a student taking all Advanced Placement and honors classes, no electives, just the hardest classes in the school. He gets a B in one class and As in all the rest. With seven classes, that’s a 3.9 unweighted GPA, or 4.9 weighted.

Now imagine another student. This one is lazy, and doesn’t do any homework. He takes no AP classes, has a study hall, an off-block, and an easy elective. He has chosen the easiest classes available. The student easily achieves straight As, receiving a 4.0 GPA, weighted or unweighted.

Does it seem unfair that the unweighted GPA of the high achiever is lower than the lazy student’s?

For students, the grade point average is the primary measure of success. A 4.0 unweighted GPA means straight As in all classes, and is the highest possible unweighted GPA score.

The issue here is that an unweighted GPA does not take into account the difficulty of a class or the grading of a teacher. Colleges usually look at the unweighted GPA for acceptance. With this system, a student taking easier classes is more likely to get into a better college.

But there is a solution to this: the weighted GPA. Weighted GPA takes into account which classes are honors/AP and which are not, throwing an extra point into the average for each weighted class.

Some students don’t have a problem with GPA.

There’s only one problem with the weighted GPA, and that’s the fact that students can’t take most electives or languages and still achieve a 5.0, even with straight As.

Colleges love a student with multiple interests, who have taken foreign language classes, and achieved high grades. However, using a weighted GPA, a student like this isn’t as academically successful in the eyes of the college.

Do extracurriculars make someone a bad student? Some say it builds time management skills and other important qualities that are essential for transitioning into adulthood.

Ward, who does horseback riding and plays golf, says her extracurriculars “take up some of my homework time, but not too much.”

Being involved in activities can help a student make more friends and have fun. These types of students are typically more successful in their classes as well.

The valedictorian, or the student with the highest unweighted GPA, along with a few other qualifications, can be awarded to a student taking very easy classes.

Why is winning the valedictorian status such an honored title that can grant scholarships, when it is comparing grades that students earn in completely different classes? The student needs a combination of high achievement, hard classes, and after-school activities to truly be a good student.

According to Ward, there are other measures of success for a student, such as “how well you’re doing in classes [and] what kind of classes you’re taking.”

This is something that colleges look at–they will view your transcript and see which classes you have taken and your grades for each one. But it slows down the acceptance process–it’s easier to just look at one number that summarizes a student’s entire academic career.

The GPA doesn’t represent a student well enough. It’s just an average of their grades. Without knowing more details, it doesn’t say anything about the student and their effort.

Is there a perfect measure of academic success? Most likely not, and if there is, we haven’t found it yet. In the meantime, we need to put less emphasis on GPA. Assigning students class ranks and putting a number to their name is not helpful to anyone. Students with high grades in difficult classes should be recognized, as well as students with non-academic achievements.

Doing away with the Grade Point Average would help students to feel better about themselves and the work that they do. In today’s world of self-hate and uncertainty, an accepting, unranked community is what we need.