Review: “The Chilling Adventures of Sabrina” 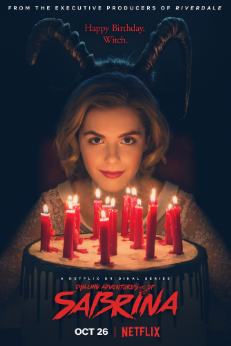 Photo marked for reuse with modification.

“The Chilling Adventures of Sabrina” is a new Netflix show that came out October 26, based on the comics Sabrina the Teenage Witch. The show follows Sabrina Spellman, who is half human and half witch, and her struggles with the two sides of herself.

In the series, Sabrina has to decide whether or not to sign away her soul to the devil, meaning that she would have to leave her human life. The witches cult, while seeming jarring in nature, is actually a flip on Catholicism, from their school devoted to the religion to a high priest, and characters’ blind devotion to Satan. The entire season is showing Sabrina preparing to take on the devil himself. While most of the episodes lead up to that, episode 5 is a total detour. It doesn’t give the characters any new traits, and is ,in my opinion, the worst episode.

Besides that episode, “The Chilling Adventures of Sabrina” was a very good show. It blended aspects of horror and thrillers with a teen drama seamlessly. The performances by Kiernan Shipka, who played Sabrina, and the rest of the cast were amazing. Shipka portrayed Sabrina’s struggle with the two sides of herself and rebellious nature with conviction and emotion.

Another element that I enjoyed about the show is that it didn’t show the fact that it was a teen drama in your face. I’ve noticed in most teen shows they have the characters interact with their phones a lot and use slang. Usually these shows pick up on trends after they have been out of use, like using exaggerated text lingo. But, “The Chilling Adventures of Sabrina” doesn’t use any of these tactics. There are phones and laptops in the series, but they are not used as plot points in the series. This gives the show sort of a timeless feel.

“The Chilling Adventures of Sabrina” also has an amazing set of diverse characters. I particularly loved how they portrayed Susie’s arc with accepting that they are nonbinary, an identity that is not usually represented. It was even better that Lachlan Watson, a nonbinary person, played Susie, which made the character feel more accurate.

“The Chilling Adventures of Sabrina” is a great show, filled with great characters, stories, and imagery. If you love horror movies I’d definitely recommend the show, just maybe skip episode 5.