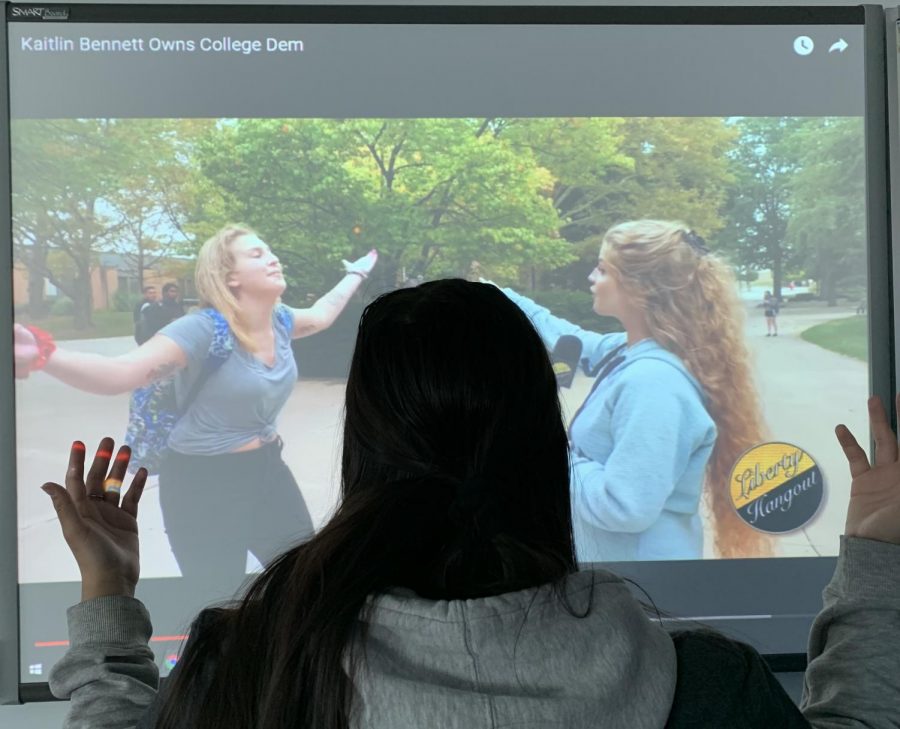 College graduate and now social media influencer, Kaitlin Bennett, first took off on social media for her college graduation picture. The photo depicted Bennett in a flowy white dress with an AR-15 gun strapped over her shoulder and the words “Come and Take It” on her cap. From this moment on, Bennett’s social media has grown immensely in response to her pro-gun agenda. She has around 287.5K followers on Twitter and 401K subscribers on YouTube.

The massive amount of attention that Bennett has received is due to her exploitive and incendiary manner that she used to address her political and personal beliefs in public. Bennett is a self-proclaimed journalist and this persona is the skin she puts on when interviewing people in public. What sets Bennett apart from other conservatives is the fact that she has blown up on social media for forcing her own opinion on other people.

Recently, Bennett addressed a Stoneman Douglas High School shooting survivor, David Hogg, to advocate for her pro-gun agenda. Bennett mentioned Hogg in a tweet challenging him to an arm wrestle over the Second Amendment. As an American gun control activist, Hogg could take offense to this tweet by Bennett since he had experienced loose gun control restrictions first hand, and  Bennett’s insensitivity toward anything but her right to her pro-gun agenda. She is going about advocating for her opinions that are extremely forceful.

Bennett’s strategy is to use other people’s words and twist them. Bennett deliberately asks her interviewees provoking questions that almost forces people to react out of frustration and defensiveness. Bennett then twists their words to make herself look like she is being attacked for her viewpoints, only antagonizing the interviewee more. She feeds off of this tactic to deem herself as the victim to make liberals look like bad guys, whereas she was actually the one who initiated the conversation and twisted the words of her interviewee.

Junior, Aunika Skogen, treasures the same values as Bennett, but she believes that the way Bennett interviews people can be “too in your face about it instead of listening to others’ opinions. She kind of immediately shuts them down instead of having an actual conversation.”

On Bennett’s YouTube channel, Liberty Hangout, the video Women Against Women’s Rights, Bennett goes to a women’s march in Washington D.C. to interview women about gun rights. Bennett interviews many women by addressing the sign that they are holding and then twisting those words to reference gun rights and control.

For example, a woman holding a sign with the words, “Hands off our Rights!” gave Bennett an opening to bring in some of her own political views when she commented on the woman’s sign: “When I read this I think, ‘oh hands off our rights, I’m thinking hands off our gun rights. We want to be able to protect ourselves as women.’”

This is a perfect example of Bennett’s aggressive and vigorous strategy. She makes her statement and then as her interviewee reacts, she proceeds to act as if she is the victim and her interviewee is now attacking her belief in gun rights.

For those who disagree with Bennett’s beliefs, it is best to stop showing her the attention that she is receiving. Where it may be a temptation to click on the posts by Bennett that surface on social media, the more attention that she is receiving, the more influential she becomes. Bennett’s beliefs are completely up to her and all people have a right to their own beliefs, but the way that Bennett is attempting to force her opinions on other people who do not agree with her is blatantly disrespectful.

Bennett has no problem with provoking others and then being disrespectful to them when they react. She gains traction and publicity through the reactions that she receives from people. Bennett should not be classified as an influencer because of the way that she addresses people with opposing opinions.

As tempting as it may be to watch, Bennett twists the words of others, in no way is it beneficial to support the aggressiveness she uses to force her opinion onto other people. Bennett is blatantly disrespectful to other opinions that are different from hers, therefore, she should not be given the opportunity to be classified or given as a platform to be an influencer.