Religion is often a social taboo, let’s change that 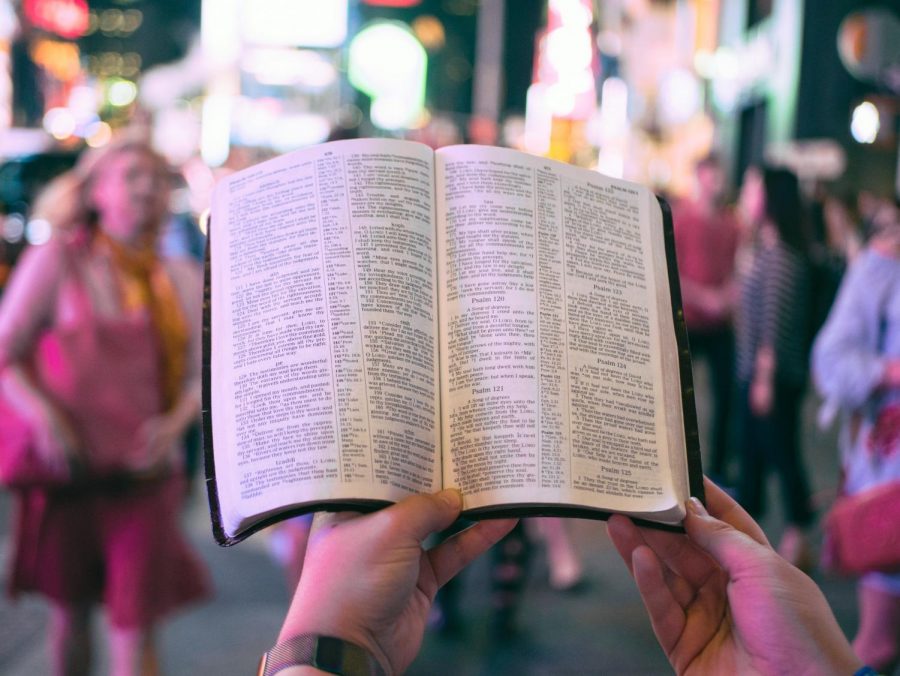 Religious discussion is fleeting, and public school is only making matters worse. Photo courtesy of Aaron Burden on Unsplash.

In 1962, the U.S. Supreme Court ruled that school-sponsored prayer was unconstitutional. Ever since religion has remained separate from school. While this maintained the right for people to practice, or not practice, any religion they would like under the U.S. constitution, banning mandatory school prayer may have created some unintended consequences.

Religion used to be popular. Especially in the late 1950s, almost half of the U.S population attended church weekly. Now roughly 20% of Americans attend church somewhat regularly. In Arvada, CO particularly, a survey taken of 102 students and families suggests that 58% are religious, but of that number, only 49% say they attend church regularly. It is clear that there has been a drastic decline in religious presence over the past 50 years, especially in the rising generations.

Now, with a decrease in religious Americans, it is interesting to ponder on why the discussion of religion seems like a cultural taboo. It could be because it stems from eliminating the presence of mandatory prayer in the court ruling. This may have been what created the stigma that religion must remain completely separate from school. Religion is a large part of culture, so simply removing it from education shouldn’t be an option. It is a sensitive and personal subject, but shouldn’t schools put more effort into teaching about different aspects of religion?

Teachers can be neutral when they discuss politics or contemporary issues, so why can’t they talk about religion in the same way? A-West students get limited exposure to religious history in classes like World History or European History, but they don’t get the opportunity to gain new perspectives about other’s beliefs.

Most public schools have stayed away from offering religious courses to avoid promoting one religion over another. Teaching about religion is often avoided because teachers don’t want to be accused of forcing religion onto their students. A-West English teacher Angela Dryer expresses her thoughts on religion in public schools.

“More students and more parents are more vocal about when they don’t like something a teacher has done. They don’t look at [discussing religion] as a way to expand the mind, they look at it more along the lines of ‘I don’t like what you are saying and you’re making my kid question something I’ve always done.”

In the same survey of Arvada students and families, 63% said they thought a religion class should be taught in public school. It would teach students about different religious beliefs and help them understand worldviews. This would provide a lot of opportunities for students to expand their horizons and be more open and considerate of what their peers believe, and why they believe them. This would help eliminate hate and prejudices people often hold against each other.

Dryer mentions that schools like Regis University teach theology courses and often find that it broadens the perspectives of their students.

“In order to be a positive force in the world, we must understand everything around us without judgment.” She continues, “I do think theology should be taught but in the scope of World History and US History. Without [religion] we are missing a whole part of the information.”

Religion has shaped culture throughout all of history. Censoring religion prohibits a student to understand the world as a whole. Religion for many students is very important, so to create a united culture at A-West, embracing religious discussion would be very beneficial.

For many students at A-West, their religion has helped them push through the pandemic and helps them fill their purpose in life.

Grace Wallace, a sophomore at A-West, expresses, “When the world is falling apart, it is impossible to feel at peace without God.”

Some nonreligious students mentioned that they drive their purpose from other places. Junior Grace Cochran explains, “Every moment could be someone’s last, so be kind and truthful; make them happy.”

Regardless of a student’s belief, everyone should be accepted. That is why a religion based class would be very influential. The purpose wouldn’t be to sway one to join a religion, but rather it would broaden one’s perspectives of life. It would create discussion- help the world listen to each other again. It would showcase foreign concepts as humans, and it would bring light to how similar people are to each other. Most people are in search of purpose, but they just believe it in different ways. People won’t need to fight over religion, but learn to accept people for who they are. In order to create a more unified nation, learning about religion should be a priority. In order for the world to unify again, it needs to build bridges between people, rather than barriers.