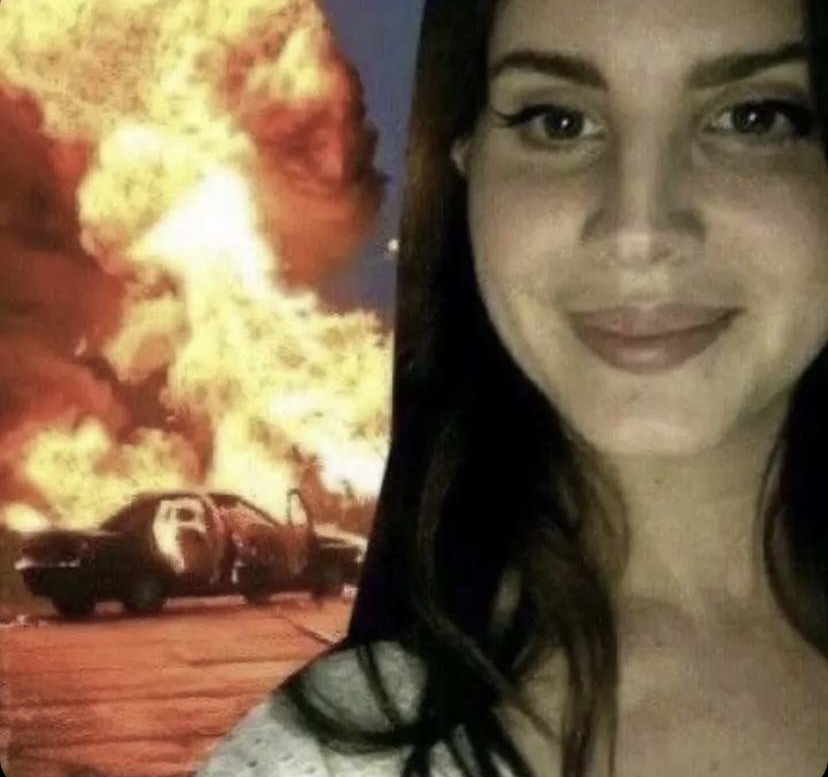 Edited photo of Lana Del Rey standing in front of a car on fire while smiling, quickly became the photo associated with the Lana Cult. Photo courtesy of Tori Foss.

TikTok’s newest trend involves singer Lana Del Rey, but not in the way anyone saw coming. Del Rey stans have completely taken over Tik Tok recently, quickly dominating every comment section on the app in a matter of days. This trend, known as the “Lana Cult,” is upsetting many people on the internet, but it is actually a brilliant trend causing many positive effects to all of those involved.

It has been known that Del Rey has many die-hard fans, but now it is clearer than ever before thanks to the new appearance of the Lana Cult on TikTok. Rumors started to appear earlier this month as people started saying the singer burned a Bible and was overall being disrespectful toward religions. Cancel culture is huge right now on TikTok, so it took no time for these rumors to spread and be believed.

Prerna Nambiar with HITC clarifies, “Even though there was no proof of this alleged “burning the bible,” people started canceling the singer on TikTok. Meanwhile, there were others who came to her defense. It is unclear who started the rumor. However, it is no surprise that it was quick to spread across social media.”

After being a major source for drama over that rumor, Del Rey fans quickly jumped to her defense. These fans were able to get the attention off of her recent drama by doing something even more insane- igniting the rise of the Lana Cult.

It remains unclear exactly who started this Lana Cult in the first place, but one thing is for sure, they have since created an extremely powerful group. The hashtag “lanacult” on TikTok has already reached over 93 million views and counting. Fans are taking this cult seriously as the initiation into the group is to switch their profile pictures all to the same photo of Del Rey smiling in front of a car on fire. TikTok users across the map have been seeing these accounts all over in comment sections on their for you pages, causing the cult to gain more popularity.

Many people are taking this idea of a cult seriously, saying that it is offensive and not something that should be joked about. The Del Rey movement is seen as a mockery of other comments posted by Christians detailing “serious” messages about Jesus. From the looks of it, however, it is just a joke with no meaning or ill intentions towards any religion.

Sophomore Tori Foss has been following this trend closely, not understanding why this light-hearted joke is being seen as offensive.

“It’s just a lot of Lana Del Rey fans following each other and leaving wacky comments to get more people to join,” Foss describes.

Del Rey stans are all over the app, making it easy for them all to unite and get more followers to join in on the Lana Cult. This whole trend is just a simple joke that helped build a strong community of Del Rey fans, but it is successfully helping bring her more attention and fame even if that is not the intended purpose of this cult.

While fans are bombarding comment sections on TikTok, Twitter users spread the word about joining the cult. This new publicity for Del Rey is in perfect timing as her new album, album name, is set to release on March 19.

Adding up all this information, it makes sense why this new bandwagon to join something as obscure as the Lana Cult instantly blew up overnight. This whole trend is a way to help promote the new album and get people talking about Del Rey in a good way. It makes sense that Del Rey stans would do all this to help her gain popularity, and it is working better than anyone could have expected.

Not only is this entire movement promoting Del Rey and her new music, but it is also building up views and followers for many small accounts on TikTok.

Foss explains, “It’s boosting people up on TikTok to help them get a better following really. It’s a positive thing, for the most part (it’s kind of chaotic).”

This idea of small creators benefiting from trends has been cycling through TikTok for many years now. There is always a new craze on the app, which calls for people to join in by changing their profile pictures. It was seen with Star Wars characters and Alexei from Stranger Things where it seemed that almost everyone had matching profile pictures. These viral trends gained mass followings in such little time where it became rare to see anyone on the app without a matching profile picture. This commonality gave new personality to small creators, turning them into sensations overnight. The Lana Cult trend is really just benefiting everyone involved including Del Rey herself.

Del Rey fans are extremely loyal and have managed to create a new massive trend in a matter of days. Whether she knows it or not, this movement is gaining tons of media attention as people cannot help but talk about it.

TikTok has shown over again how loyal and dedicated fans can be when they really want to, and this Lana Cult is just one example. The app holds extreme power. What started as a joke has now become an internet craze, which goes to show just how powerful Del Rey fans are.