Those who live above the law 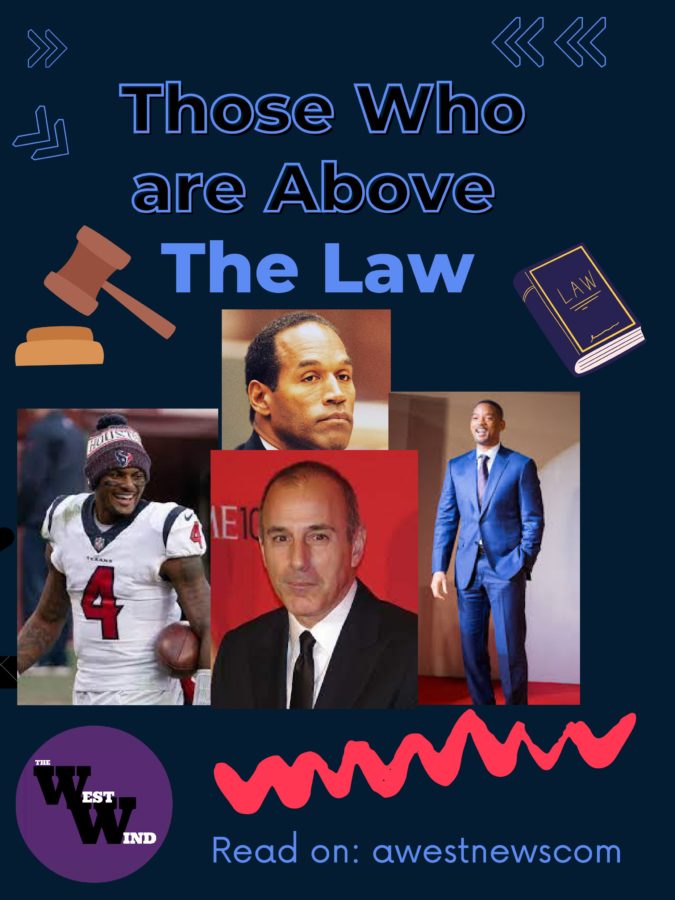 Will Smith unexpectedly slapped Chris Rock, lashing out because of a joke Rock made  about his wife during the Oscars on March 27th. Within 30 minutes later, Smith was accepting his award for best actor. Giving a long and emotional speech in which the crowd erupted with praise and applause for his accomplishment. It was almost as if nothing had happened before this and everyone surprisingly forgot about Smith’s attack on Rock.

Declan Robbins, a junior at A-West, acknowledges the fact that Chris Rock made a mistake, but says that, “I think that Will Smith should have taken a different approach, such as talking to him instead of slapping him in the face.”

These unexpected turns of events lead me to believe that in this day and age, society gets to pick and choose who they want to shame. Not only that, but it may be reasonable to assume that celebrities in the United States get special treatment when it comes to the law. Celebrities run our country, which has led to the gap in the accountability of our justice system.

After the incident, USA Today claims that Chris Rock declined to file a police report Sunday after Will Smith slapped him onstage at the Academy Awards. Later stating that, “The Academy condemns the actions of Mr. Smith at last night’s show.”

The academy may have stated  that they did not condone the actions of Will Smith, but that was clearly just a slap on the wrist. Now I am not saying that they should take away the Oscar from Smith because it was well deserved as he won best actor. The Academy should however give Smith a fine instead of ignoring the issue hoping that it withers away. Everyone in the audience pretended like Smith did nothing wrong, even Chris Rock played it off. Though the joke was inappropriate, Smith still committed assault. A man can be arrested for merely not paying off a parking ticket, while Smith can get away scott free slapping someone on live television- All because he is a celebrity.

Andrea Peyser, reporter for the New York Post says, “Recall the O.J. Simpson murder trial. The football Hall of Famer was tried and acquitted of the 1994 slayings of ex-wife Nicole Brown Simpson and a friend, Ronald Goldman.” Surprisingly the AP-Ipsos poll found 77 percent believe Simpson was guilty. Ultimately showing the disparity gap between the rich celebrities and the American common folk. If you are rich and famous then you can outwork or find loopholes around the system.

To show what the public is thinking, CBS News did a survey finding that 60 percent of people said that celebrities get treated better by the judicial system because they have a lot of money, while 12 percent think they are singled out for prosecution because they are high-profile. Only one-quarter of the public thought celebrities are treated as ordinary citizens.

Jake Minsinger, writer for CBS says that, “They definitely get special treatment, Usually they’re all out on bail. When they show up in court they’re well dressed. And instead of a public defender, they have a team of the most expensive lawyers in the country.”

Money talks, and these multimillionaires find loopholes in the justice system. Take Deshaun Watson for example. According to Bleacher Report A Harris County grand jury will not be pursuing any criminal charges against Watson. If you recall there were around 25 legal accusations made on Waston from women pressing several accounts of sexual assult. Not surprisingly, these charges were dropped. Watson is too valuable to the NFL. He is one of the rising and most talented stars at quarterback so it makes sense why the NFL would want to keep his record clean. As the NFL rakes in 13 billion annually and anything that could lessen their profit would be detrimental to the owners.

Interestingly enough the Cleveland Browns just traded for Deshaun Watson and signed him to a 5 year 230 million fully guaranteed contract according to Ian Rapoport. Making him one of the highest paid quarterbacks in NFL history. For some reason America has chosen to reward and let those who are high in social standing walk away free.

From Will Smith, to OJ Simpson, even Deshaun Watson are forgiven quickly by both society and the justice system. While Alvin Kennard can spend 36 years in prison for stealing $50 from a bakery according to ABC News.

It comes down truly to perspective. Kennard was a nobody struggling on the streets and these are examples of some of the most highly regarded members of society. So obviously their treatment within the judicial system will be different. Money and fame may not buy happiness, but as long as the justice system remains the same in America, it can buy you limitless grace and freedom.