A lifetime of practice, a season of success – Geneva Pauly 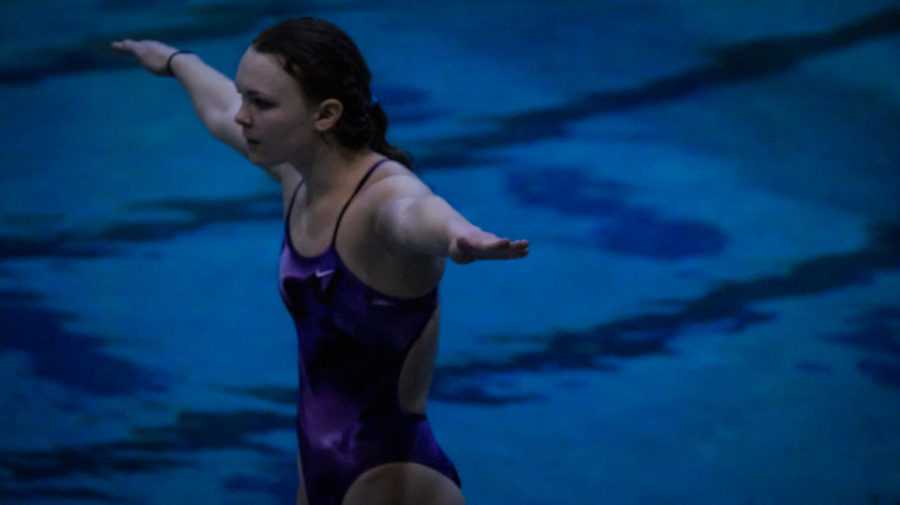 Geneva Pauly is determined to win the state championships for dive, but it took a lot to get where she is now.

Geneva’s victory was not a close one. Her scores were unbeatable and her skill was unmatched. Upon finishing her final dive of eleven, Pauly led by 68.6 points. Up until this point, the highest-scoring dive of the meet was more than 10 points under this margin. By the time she emerged from the water it could not be doubted that she would win, and after a decade of hard work and close finishes, Pauly had won the state title.

Pauly’s story is not only successes though. Like many others, she has had to face the trials and tribulations of being a student-athlete. Pauly started her diving career in third grade with a club called “Mile High Dive”.

Pauly says, “I knew I loved diving as soon as I joined. I’ve always loved to challenge myself and nothing matches the adrenaline I get from the dives”.

For Pauly, diving is not just some sport or hobby. It’s her life. She says, “I’ve made some of the best memories and friends of my entire life. A lot of the people on the team I have grown up with.” This passion is one of the major reasons she has stuck with the sport for so long even after some devastating events.

High school is when Pauly started to make a name for herself in the world of diving. Pauly has been to the state diving championships all four years of her high school career. However, in her freshman and sophomore years, she dove in the 4A category. At both appearances, she placed third overall in the state. Tough beats in both cases. But these losses did not deter Pauly from continuing.

She returned her junior year after an amazing season to perform at the 5A state championships. This time a broken foot and a prolonged back injury were the cause of her 9th place finish. Such occurrences would lead a lot of people to quit the sport for fear of not being able to succeed in the way that they wanted to. Even through this Pauly persevered. She continued to practice and work throughout the year with her club and with the A-West diving team during the off-season.

In her senior season it was a rare occurrence for Pauly to not podium at events. Throughout the season there were very few other divers in the state that could even compete with Pauly. One of the divers that often scored close to Pauly was defending champion Dahlia Allen. But at the championship on February 16th not even she could come close to beating Pauly who won with a final margin of 8.6 points.

The question must now be asked. What does a state champion do next? For some, this can be a difficult question. Pauly however is excited to let everyone know that she has signed with the University of Iowa’s diving program. Iowa is a national powerhouse in swim and dive and is excited to invite the Colorado state champion to its roster.

For Geneva Pauly the water is still cold. It always will be. But it is always shining bright, reflecting her future across the slow ripples of the water under the diving board.